I am glad I have the radiance.

1. As soon as I got back home from the trip, my mother asked, "How was the Gonque?" Waiting to check in in the Algonquin lobby blew my mind as much as getting lost in the Met and winding up in the regal bedrooms. I did not know the hallways were wallpapered with New Yorker cartoons. We paid $300 and got a suite with an unquantifiable bed, a bathtub the depth of which was almost to my knees, a separate living room with a couch and desk, and two TVS! I've never stayed in a real hotel over night anywhere. A great deal of that thrill had nothing to do with New York. It was so amazing that I was overjoyed to stop jetting and curl up there at eight on the night of my birthday.

2. My boyfriend and I went to the American Folk Art Museum, the MoMA, the Neue Galerie and the Met. The Folk Art Museum had two floors closed and so cut admission in half, so communing with Henry Darger cost me $6. I was out of my skull right away. I swooned all over the MoMA. My boyfriend and I unanimously agreed upon the German Expressionism: the Graphic Impulse exhibit as our favorite part of the trip. I fell in hard, mad love with Egon Schiele. 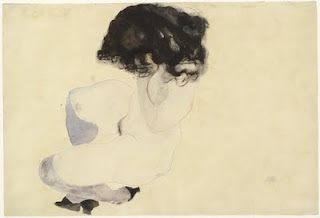 The Neue Galerie is on 5th Avenue, we were on 6th, and the vast difference in house number made no impact on me as we hiked forty blocks first thing Saturday morning with no breakfast. It made the Cafe Sabarsky that much more unfathomably perfectly fin-de-siecle-ly Viennese perfect. I almost cried when I noticed the reproduction of Freud's couch. It was like coming home. Also: Egon everywhere. The Met came as a pleasant surprise. I had never gone that far uptown, did not realize it was across the street, and when we noticed the Alexander McQueen exhibit was on, holy shit - 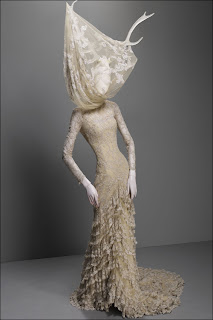 My boyfriend charmed my face off by whispering to me how cute he feels I'd look in the Widows of Culloden dresses. His charms are unfathomable. He also reacted with complete calm and appropriate assertiveness when Google Maps deposited us twelve blocks from where we needed to be upon first arriving. Not freaking out is something I am not used to in traveling companions - keeping calm is typically my responsibility. He was so cool about just being there, and that alone made every facet of the weekend radiant.

3. It was the maitre d's birthday at the Jewel of India, too! We did not make it to Big Gay Ice Cream, but we did find the Macaron Cafe, and I had a matcha-chestnut macaron that I miss like a lover.

4. My boyfriend works in downtown Harrisburg and has a permit to park on City Island. We left the car there and walked at 4 a.m. across the bridge, downtown, to the train station. His sleeping the whole way with his gorgeous head on my shoulder and the train-speed scenery blurring and Fleet Foxes' new album provided me with the greatest dawn I've ever experienced.

5. John Waters curated a table at the Strand. We have Siamese brains. Other organs, too, have at least psychic linkage. That link does not provide the full list, but I went batshit buying his recommendations that I did not all ready have and thrust voraciously at acquaintances. My boyfriend gave me his presents Thursday night - Dalkey Archive and New Directions books he picked out of my wishlist, Zizek's Living in the End Times, which I fondle any time we go anywhere, and SQUEE!, which I never picked up when I was in high school and have always regretted it. I wanted to hug these on the train ride at least, but I thought better of it, and I am grateful - no self-control was exercised in my attack on museum shops and bookstores. My very favorite book purchases were Mel Gordon's Feral House titles Voluptuous Panic and the Seven Addictions and Five Professions of Anita Berber.

Now I am twenty-four, and I have the day off from work tomorrow to convince my body that it's getting rest.
Posted by Unknown at 1:57 AM