Niina Pollari wrote wonderfully about the physical property of Courtney Love's singing and perpetuated the chain of Love as I spent my Friday listening to My Body, the Hand Grenade. A large part of my heart is allocated to the first half of that album, which are most of Hole's pre-Pretty on the Inside singles and the rage is bottomless.

I looked up and loved the lyrics before I heard the music because they reminded me of Sylvia Plath. I was eleven, and I learned "Cut" by heart. I never looked up the word in it I didn't know, trepanned, and the other day I was reading "Cut" while my boyfriend talked to his brother, during which he yelled, "You're getting trepanned for that," and explained it before I had to ask. My boyfriend is an amazing person.

We had just been bemoaning the telltale signs of store-death in Barnes & Noble and I bought the latest issue of Bitch wherein there is an article - "Nobody's Mother" - about the lineage of Elsie Fox -> Paula Fox -> Linda Carroll -> Courtney Love -> Frances Bean Cobain. All lyrics managed to be misquoted (except from "Softer, Softest") and the article was trashy. It flirted with the way each woman faced conspicuously the same struggle to be recognized as artists, but sopped that up with how it came at the expense of being mothers which I found distasteful. I would have rather heard more about their art. Then I ran into the Heidi Slimane pictures of Frances Bean on tumblr. 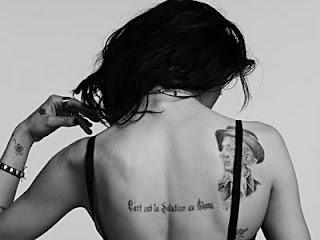 Right under a remark made by one of my best friends about how Sylvia Plath was a terrible mother.
Posted by Unknown at 8:55 PM