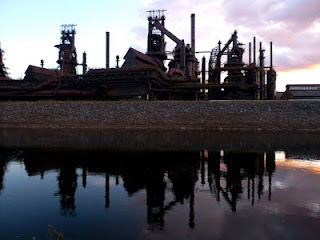 My boyfriend's brother is getting married in a few weeks. To celebrate, we went with he and his fiancee to the arts space at SteelStacks in the old Bethlehem Steel plant. The arts center is across from the ruins, which they illumine after dark.

We went to see the Found Footage Festival, which is one of the favorite things of my boyfriend and his brother. The guys responsible for FFF, Joe and Nick, were getting food at the Mike & Ike Bistro (whaat) when we arrived, getting in line behind them, then ultimately sitting next to them in an otherwise gigantic, vacant lobby. So I thought my boyfriend knew they were there. He did not. We could take alcohol into the theatre. Something happens to me when I see Bob Odenkirk that happens when I see no other human.
Posted by Unknown at 10:23 PM