Courtesy of the Midtown Scholar, Harrisburg had its second annual Book Fair last month. I was all over it. It is all over HMag.

The building in which the Scholar resides used to be an olde theatre of the variety Lincoln was shot in, and it is the largest used bookstore between New York and Chicago and it has big-box-store hours. Since I keep silly hours, my boyfriend goes and drinks coffee and wanders their underground expanse of history texts until I get off and articulate my envy. The owners just inaugurated a press, and I can't wait to talk all about it!

Or about these Dusie books, specifically Roseate, Points of Gold by Laynie Browne, Three Geogaophies: a Milkmaid's Grimoire by Arielle Guy, and Herso by editor Susana Gardner, from Black Radish. 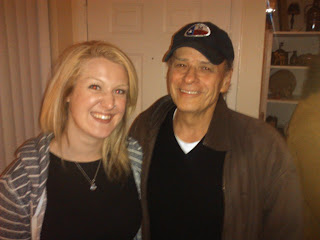 That's my best friend Gretchen hanging out at her house with Tim O'Brien. I don't need to talk about that, though, because that smile speaks for itself.
Posted by Unknown at 12:30 AM