My heart's made of parts.

Coming up for air on drafting a novel, both the new installment of Very Literary (at witf) and my review of Carina Finn's My Life as a Movie (at Anobium) are more alive than I am these days.

I have been accumulating notes towards this novel forever with the intent to make it big. I take notes more to keep myself spry and forming and considering constantly than to keep records, although I never get rid of anything. I never go back and reread my notes. I have a better attitude towards them than actual drafts. I am at fifty pages now in the draft and fighting the compulsion to stop, go back, and start tightening. I am feeding my desire to lend the aspiring-book a metal back-brace by rifling through my stuff in search of the last round of notes I took, which charged me full of such feelings like I can go take this and make a novel now, this isn't just the same stuff I've been scribbling for a decade now (since a lot of my regular maneuvers came from sophomore year, I have enjoyed intimidating myself with this new reality since the spring: I've been in a fugue all my adult life yet, still like oh my god I started this in Algebra II I better finish it). I took these latest notes instead of surrendering all my concentration to the job I had at the time, at the phone company. Since leaving the phone company, I've moved, and my notebooks are spring-loaded inside this desk that - though reliable, I'm happy to have a desk - is a significant change from the unmovably enormous monster I worked on in my office at my parents' house. I let explode the ones I thought had works-in-progress inside of them, knowing that while I'm basically asleep like I am now, these notes will slip by me easily since they are not neatly within a notebook that I associate by sight with a specific stretch of school or job. They're on a rain-damaged, spiral-bound notepad. Now that it's in my hands I'm staggered at the amount of real note-taking I did to learn to program phone and internet. I all ready forgot a lot of the weird terminology and it's all here. When the internet abruptly stops working sometimes I do distantly wonder do they not know our VCI is in use? and I don't even know what I mean anymore.

And all my notes are in coded language. I should have known.
Posted by Unknown at 9:59 PM 2 comments: 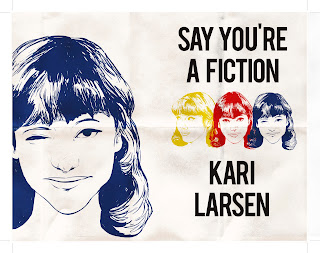 The final draft of the cover of Say you're a fiction! (To quote Brad Neely) I could cry a second self of tears. I am trembling with pride and so amazed my best friend Kara is such a brilliant artist.
Posted by Unknown at 6:34 PM No comments:

I've got two open windows. Of the browser variety. I'm working on Very Literary and an essay at Anobium. The essay's spiraling out of control: I'm thinking about the need for physical models of behavior, watching artists work, documenting artists, the point at which making art physically becomes "performing documentation," subjective documentation, perpetuating documented art, modes of perpetuation (and the Internet) and doing things alone. Initially I didn't think any of my friends would see me read in Philadelphia (they are beautiful people, I just figured they'd be busy) and I was surprised to be reading in a shop that wasn't opened, to an audience that was sitting, with a spotlight on me. It was fun, and that is valuable, but I had it in mind that I would read and I wanted to do readings to reinforce that reading my work out loud was very much between the work and I, recognizing that I'm responsible for the work, and my interaction with it is what is really there, and the thrill/notion of perpetuation is false. Then I watched the Marina Abramovic documentary. After getting sick. My headspace is impossible. The way I described it just now the essay doesn't sound like it's spiraling but I'm consciously avoiding and excising thinking about "artistic success" which I'm corralling for the thing on Tiny Furniture on which I'm still working. I love thinking about "artistic success" (I cannot help putting it in quotes). I love when my relatives ask me when I'm going to win an Oscar.

I'm still recovering from a really bad episode that was dashed for the most part after reading My Life is a Movie by Carina Finn, my review of which should cycle up on Anobium very soon. Reading it was like mainlining relief. I'm still feeling a little like mush - the bruisy after-affects of being basically insane for a little over a month - and I have been trying to get into television. Girls was very therapeutic. I do not like Downton Abbey, but I devoured the first season on mute in order to see Dan Stevens move. I think my state would be totally improved if there would just exist a comedy about Dan Stevens editing an online literary journal.

And solving mysteries. I am host to such mysteries that could benefit from your solving.
Posted by Unknown at 10:04 PM No comments:

Hey Trotsky, you're in advertising.

I am a genius at meeting connecting trains. Philadelphia's regional transit system is a human achievement. I could feel myself melting under the lights at the Moonstone Arts Center. Debrah Morkun is fabulous. Jaime Fountaine read, then I read, then Chris Pusateri and Michelle Naka Pierce. My friends asked me if what I read - "I'm Forever Blowing Bubbles" - was fiction or nonfiction, which was very flattering. I could not see the audience, and if they could see me, if they ever see me again, I think in virtually all other circumstances I would look so much better as to be unrecognizable, which I like. I looked worse, actually, at &Now. I had just gotten abruptly sick and now I am on the upswing, emerging from sick, finally, and today I really feel I have woken up from a long black spell.

I have copies of the Black Telephone in my possession. Beyond reason, they are glorious: 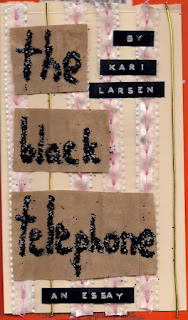 They are available from Kristen Stone if you catch her on her trek across America, or from me if you come to town and say the password. They will be online soon, though, like the rest of us.
Posted by Unknown at 8:53 PM No comments: