Wraith typing all day for money.

By the time I appear on Stage Two (in the cozy new wing) at the Midtown Scholar on November 10th at 2 p.m. for a panel at the Third Annual Harrisburg Book Festival, I will have worked off all my OVERWHELMING EXCITEMENT. The festival will see only a cool, collected version of what SCREAMS AT YOU FROM ACROSS THE INTERNET. 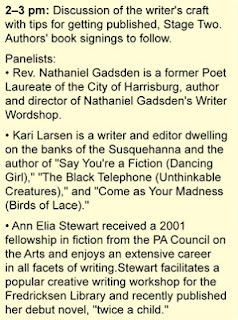 This panel will be unstoppable, and the Scholar has maple lattes. I would love it if you'd come. 2 p.m. November 10th, 1302 N Third Street, Harrisburg, PA 17102. In advance, I'm telling you that it's okay if you have a coughing fit. I had a coughing fit at the first public reading and talk by a writer I ever attended. My friend shared her hot cider with me on the walk over. The ground was covered in leaves and it was the first time all year we were freezing. We went into the beautiful hall where the reading was ready to start. Coughing is an astonishingly rare thing for me. Little interruptions that necessitate the clearing of the throat: that happens. But I was seized from within by a cough tornado and my professor, seated across the aisle from me, went for what great mind Brad Neely calls the Shame Spell. I may have made up the memory of him following me to the bathroom and forcing an explanation from me, or else it was the manifestation of said spell. Should coughing transpire while I'm on stage, I will respect it.

One can gear up to hear me by listening to me read "Van's Friend in the City" as it was featured in Anomalous issue five earlier this year. "Van's Friend" is from Come as Your Madness, coming next winter from Birds of Lace! Much of what my throat can get away with in this panel will be devoted to how what people like Gina Abelkop is doing is the most important thing. My thesis statement is a line from a Patricia Highsmith novel.

Meanwhile, things urgently need to be read: I reviewed Dorothea Lasky's third poetry collection, Thunderbird, at Anobium. I love how this book collided with me. I am really grateful to pulverizingly beautiful books right now, like Kate Zambreno's Heroines, which I reviewed right here yesterday. Today Heroines is officially released and is excerpted at the New Inquiry alongside an awesome interview with Kate Z by Mary Borkowski.

Coming soon: I am working on a new Very Literary at WITF and have two articles in the pipeline at Harrisburg Magazine (web and print!) and big things are a-boom at Anobium. Maybe on November 10th I will leak spoilers. November 10th! 2 p.m.! Midtown Scholar!
Posted by Unknown at 8:51 PM