Taschen had a sale, and I ordered Rose, c'est Paris on the strength of its cover. There is some more substantial precedent: I've been in love with the cover since the book's release. The words "Rose" and "Paris" are the kind that will get me to investigate something with which I'm not all ready familiar, since I assume that by invoking those words, the book and I have something in common, and it is that we are sexy and mysterious.

Beyond not being disappointed, this is one of my favorite books I own now. 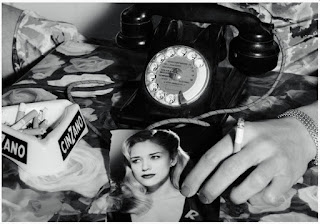 B., the protagonist, moves through the worlds of Paris looking for her sister, Rose, who she finds missing, their apartment wrecked. The book runs through different dreamlike scenarios that could justify or explain Rose's vanishing and are framed by B.'s even more dreamlike day-to-day, which includes masked nudes galore, Magic-City (known for its drag balls), and an ongoing fantasy about being the femme Fantômas. According to Bettina Rheims, the whole project is very much a tribute to the influence of the Surrealists. There are many direct visual puns, but it is not vital for one to be familiar with the canon to enjoy the images. Subjectively, I would say that anything velvety in black and white, full of "confused identities, artistic phantoms, unseen manipulation, obsession, fetish, and seething desire" will yield significant enjoyment. 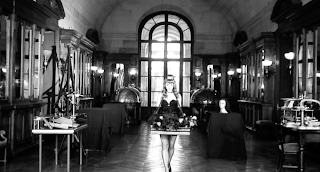 The movie is amazing, too. It comes with a movie! A whole, two-hour film of the story depicted in the photographs in the same, astonishing black and white. Lately I have been falling asleep as soon as I get home from work, around 6:30, and waking up at 2 in the morning. Unlike a lot of dazes, this one has sustained its pleasantness over the course of this happening seven times or so since May. Rose, c'est Paris on film is magnificent at that hour. So is Picnic at Hanging Rock, which I watched twice in a row this morning.

An aside: I can't believe it took me this long to see Picnic at Hanging Rock. The sinister, beautiful seventies film is my genre (Picnic, Black Moon, Wicker Man — the pastoral is an important element to the genre, but Rosemary's Baby as its urban equivalent is my first love). 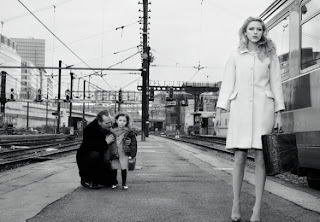 I did not know that off-duty Fantômas works the David-Bowie-alien-in-Man-Who-Fell-to-Earth look.

Of all the images, there is one of a traffic-filled street under rows of long, dangling lights that look like rhinestone necklaces that is my favorite. And it's one of so many. I love the story floating around the images and the faces and the city and the phantoms! I hate to just go "I love, I love" about something but sometimes you need a fantasy and it is good to feel the momentary erasure of the critical impulse and just go AAAAHHHHHHHHHH!
Posted by Unknown at 4:02 PM