I never strangled a chicken in my life.

I've been combing through old Mad Men episodes not intending to look for "maybe Pete Campbell is gay" clues but finding them anyway. The absolute winner is when he cheerfully recalls, with his brother, watching Rope. They're talking about murdering their mother, which, it's just delightful that Bob Benson's move was provoked by Pete's attempt to keep his mother alive. 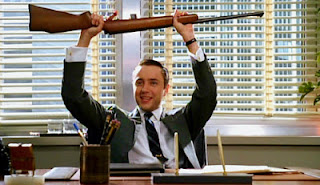 I trust the story to be worth it, so I don't gun (pardon) for anything to manifest the way I want, but if only Pete would join Bob Benson and conquer everything with love. In the third season, Duck Philips identified Pete and Peggy as the ideal agency, which Ted did again in Sunday's episode. They should unite as business partners, Peggy with her cat and Pete with Bob. Joan can be the Roger and Trudy, understanding everything, can just be fabulous.

Peggy also tells Duck at their first lunch meeting that she likes his turtle neck, setting some precedent for Ted. I could just keep going.
Posted by Unknown at 9:43 PM