Girls Season 3, Episode 2: "Truth or Dare" - You were probably the one who was crying.

This episode contained so much of what I love about Girls. Among them: its structuring absences (revelations, characters, narrative and literal "progress"). 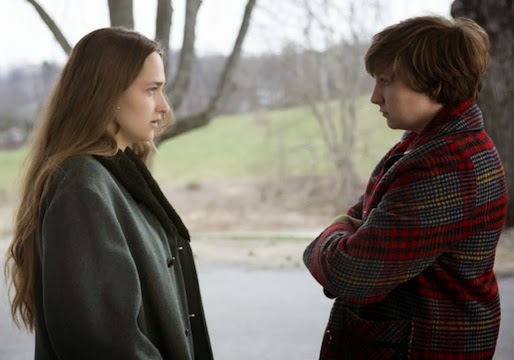 Shoshanna is the friend that Hannah turns to when neither Jessa or Marnie is available, and the resentment Hannah feels toward the two of them always simmers out when she interacts with her. I would love to see this bight Hannah back. For now, this episode puts Hannah and Shoshanna in claustrophobic proximity as they ride upstate to get Jessa from rehab. Adam goes with them, and just like Hannah did in the second episode of season two, he loses his footing in an argument by accidentally quoting a song lyric. I wonder if, when Hannah's laughing at him for doing that, she's reflecting on what a different circumstance she's in compared to the previous year.

In another Orange is the New Black parallel, Jessa rattles out of solitary. "Truth be told, I really liked being in jail for a day. It's a feeling you really can't simulate." There could not be a better means of expressing how Girls' intent differs from OitNB. There is no comparing the lives depicted in that show to this show, about "the prison that is [Hannah's] mind" and the minds of people the titulars are representative of.

What would you rather have, kimchee or Sephora?

Over the phone, Hannah almost lies to Marnie about what she's doing — just like she did last season when she poignantly avoided acknowledging how much she missed Marnie by hiding behind how busy she was with the book she wasn't writing. Instead, she takes back her lie about being away with Adam for a romantic weekend and tells Marnie that she, Adam, and Shoshanna are all headed to get Jessa from rehab. The only move towards Marnie Hannah is willing to make is a defensive one, but Marnie will not force the moment to its crisis. Instead of debating who is the wound, Marnie rationalizes the situation — she didn't want to go, she "didn't want anyone to go."

Adam and Shoshanna's remarks about boredom: I love them.

To disagree with Todd VanDerWerff at the AV Club again, I do not think that featuring a road trip in this episodes represents shrunken ambition on the part of Girls. It has long nodded at what it is — a half-hour comedy — and it barely even does what VanDerWerff says, namely watch Hannah and Adam rub each other the wrong way in a tight space. Adam's reaction to every stressor is classic Adam, but Hannah's acting up is telling and not connected to Adam at all: Hannah was expecting a madcap, "experience"-filled ride from which she would gain experience-currency and, to make matters worse, Shoshanna and Adam are not the ideal audience for her "this rocking chair's so pointy it's giving me no room to express myself" artist-tantrums. I like the way that so far this season, Hannah has been operating at full-diva, but she has no platform on which to do so. She can scold Marnie for making her late to a meeting with her publisher as they switch shifts at Ray's and she can remind Adam that the trip to get Jessa puts her behind on her writing schedule, but none of them care like she wants them to care.

Another sitcomish convention that Girls swerves is in that scene between Hannah and Marnie on the phone: Marnie turns down the chance to be thrust into "progress" when she realizes Hannah is (purposefully) excluding her from the trip. So much of life contains making dramas that you can manage and minimizing and ignoring dramas that are thrust upon you. This is done beautifully, as is — going on two episodes now — the noxious, self-congratulatory praise that Hannah and Shoshanna partake in when describing, variously, Shoshanna's approach to hooking up and studying in equal measure and their decision to "sacrifice" time to help Jessa. The way people grope to praise actions, the way people get excited by the possibility that there will be nothing to denigrate and criticize about a thing, and seeing this as a positive exercise — I LOVE IT as it relates to watching television and as a human behavior for Dunham, et al, to explore. Jenni Konner wrote this episode, and I am into it — way more than I (from this vantage point, at least) remember being into her last foray into writing an episode single-handedly, "I Get Ideas" — which did yield, I have to add, Adam and Hannah's excellent fight.

When Hannah asks Adam, aghast, if he is really ignorant to the game Truth or Dare, he affects that same amused laugh at her that he did in the first season when she defended herself for not wanting to lose weight. It is so condescending. The element of infantalization that exists between Hannah and Adam is fascinating, and I love those small details even though, ugh, every time a guy laughs when I demonstrate a strong emotion — like it is so cute I'm getting so mad — ugh. I'm impressed but that dynamic touches such a nerve every time it's spotlit. They get it so exact.

Truth or Dare as it relates to the circumstances of Jessa and Marnie, respectively, and Hannah's desire to synthesize them. Jessa is unwilling to confront what she feels and has been through, Marnie has to "stop being a cartographer and start being an explorer." Hannah hopes dares will beget truths and is resistant to the idea that it might be the other way around, particularly at this point in the narrative.

Dear Television's Lili Loofbourow expressed frustration with the lack of follow-through given Girls' glimpses at trauma. I find this way of dealing with trauma not only true to life — trauma, for better and for worse, exists in the mundane context of everyday life, and one of its difficulties is how to deal with it when it becomes relevant. One doesn't have to be triggered to need to address trauma. Jessa is unwilling to let her trauma shape her life and who she is, so she's embraced the idea that she brings — and embraced the pursuit of — her own destruction. This is projection. I have said before how Jessa is a kind of person that I recognize from life, dramatic representations of which usually endow them with an awareness of why they do what they do in order to make them willfully monstrous and, therefore, straight-up villainous, not unlike the Kathryn Merteuil character from Cruel Intentions who Jessa quoted in the previous episode.

Hannah: "Do you think Adam's right?"
Shoshannah: "Um, about there being no value in watching sitcoms?" [editor: see above] "No, he's insane."

I watched this episode twice. Reviewing it again to write this, I approached Shoshanna's take on Jessa's life with skepticism. Why? Shoshanna's been nothing but guileless, but I had earmarked this conversation as manipulative. Hannah is trying to discuss the difficulty of Jessa's life, and Shoshanna deflects everything Hannah frames as sad by reframing it, like the precision instrument she is, as glamorous. So far, there is only a little bit known about Shoshanna's life: she is Jessa's maternal cousin and her primary caretaker is her Aunt Eileen. There is probably a touch of unpleasantness in Shoshanna's childhood. When she tells Hannah that she is misremembering Jessa crying for her, afraid that Hannah will leave her on an occasion when she was very sick — that, I thought, made the whole scene. "You're probably remembering it wrong. You were probably the one who was crying." Nobody says that who hasn't been convicted of that themselves and internalized it. And Shoshanna believes powerfully. I kind of wish the scene had ended there, since it does so much to develop Shoshanna's character, but I do hope Hannah and Shoshanna's subsequent squibble about school comes back to haunt Shoshanna when she graduates.

"Who confessed to what, who's doing it with who?" Jessa tries to get a little Truth or Dare in before she leaves rehab. The friend she's made in rehab asserts his sliminess, addressing how inevitable it is that they should eventually have sex. This tidal accumulation of same old disappointments is so powerful and horrifying. I am looking forward to Jessa being thrust into the midst of Hannah's first chapter launch and its attendant psychodrama.

If any faith was shaken between last season and this, the skills employed in the writing of this episode renew my interest as a viewer in the extremely, sometimes frustratingly subtle ways the characters are built and to what ends they defer and create catharses between them in the interest of "progress."
Posted by Unknown at 2:05 PM