Girls Season 3, Episode 4: "Dead Inside" - I think all the time about what I'd say at your funeral.

What luck that an episode like this would air when I'm in a kind of panicky fugue state, able to do little but listen to Welcome to Night Vale. As far as fugues go, it is hard to do better than a Night Vale fugue. What appeals to me about that narrative — the enthusiasm, humanity, and force of love behind its protagonist, mired in and making a go of a world that is just atrocity — really threw off my tuning as a viewer for this experience. I do not mind and certainly do not fault any reviewer from disliking — and, by this point, finding abjectly repellant — the main characters on Girls. But there is merit, I think, to showing with the amount of objectivity the show employs what it is like to have people like Hannah, Jessa, Marnie, and Shoshanna in one's life, and not in a way that condescends to all the facets that might get someone like that into one's life. It was pretty scalding this week to cross and abandon the warm, affectionate landscape of Night Vale in order to appraise this viewing experience, but I still have love for what this show is doing, even when it's tough. 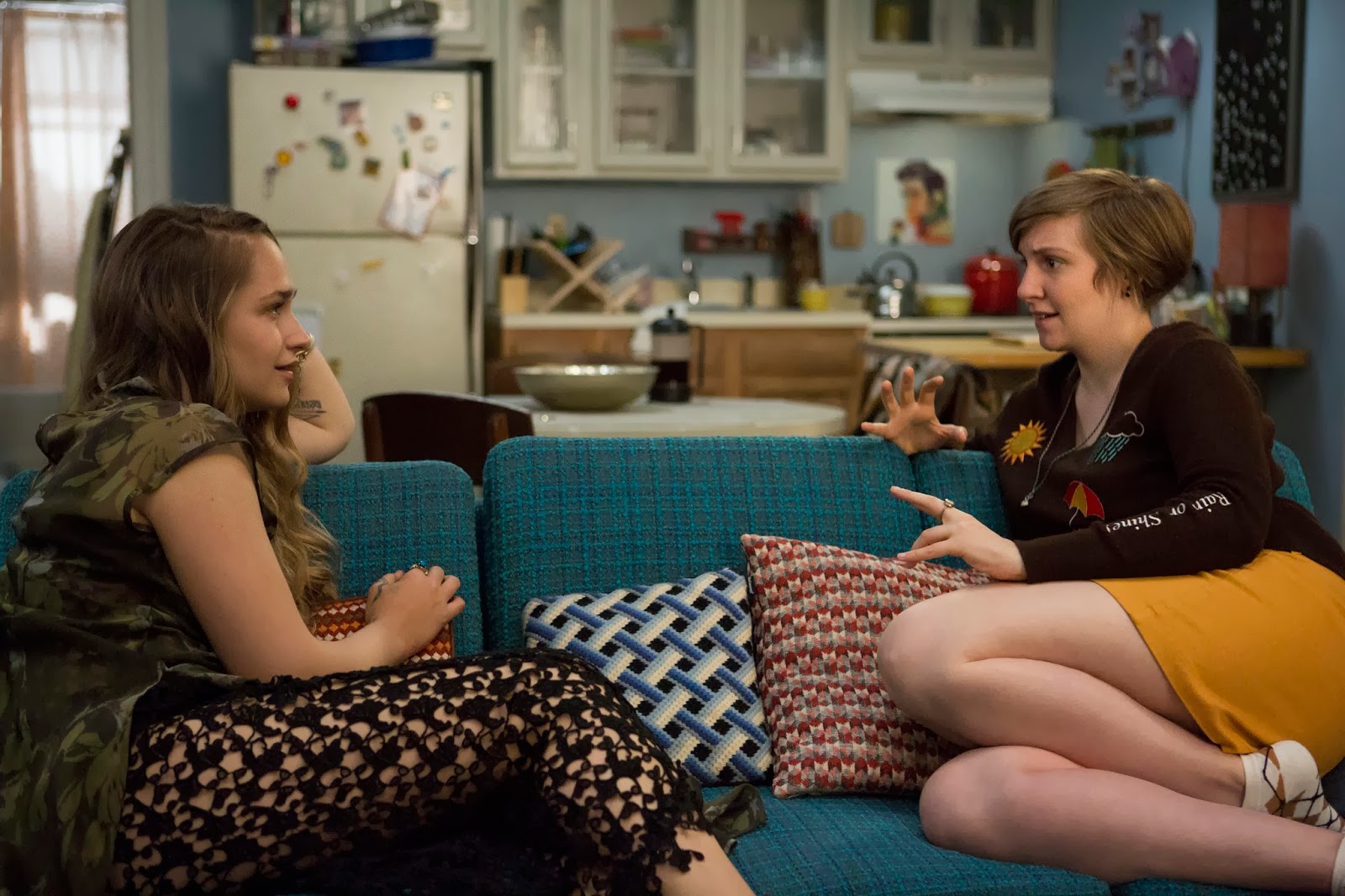 I love that the thrust of the opening scene is that no one is focusing on Hannah.

Jessa spews some "Video Games" rhetoric, which is indicative of how scarred-over her thinking is, how poorly she's coping with rehab and its rejection of her. That atrocity was borne of her disastrous visit to her father's, which was supposed to be a getaway after her messy divorce, which was the end to a marriage she plunged into because every last one of her friends was too busy or myopic to see how distressed she was that she came from another continent to seek their help after accidentally getting pregnant. Between Jessa's abuse of Laura in episode twenty-one and the events of this episode, viewers have gotten a vivid tour of just what a bad person she is (and has been). Jessa reminds me of a lot of people I've known and been close to — they're people who aren't in my life any more — and watching Jessa enables me to work out a lot of complex feelings at a safe distance. This episode, though.

After receiving news of her publisher's death (Hedwig's name is David Pressler-Goings), Hannah is primarily concerned with the fate of her ebook. So many viewers have perceived Hannah as unprecedentedly "with-it" this season, but any pretense of togetherness was all predicated on her book that might not come to fruition now, putting her whole sense of self at risk. That is the best thing that could have happened to Hannah's story on the show at this point.

Jessa and Adam have established a very intuitive rapport. I think that Adam — treacherously — leaves himself a little more available to Jessa than he otherwise would because of her addiction that he thinks, erroneously, she is invested in battling. Or, it would seem she has a handle on not snorting heroin but she has no handle on not projecting the hate and hurt that drugs numbed onto her every human interaction. Jessa is suffocatingly addicted to this.

There are some interstitials throughout the episode of Marnie changing her life, juicing and exercising and what have you, not unlike the Shoshanna interstitials in episode twenty-one. I do not like this pressure to show, in blinks, that a character not central to that episode is alive. After Jessa's mute appearance last week, the show — by episode — seem strained to accommodate all the stories where, beautifully and effectively in season one, characters were omitted from episodes with the confidence that their audience wouldn't forget them, that the story would roll its focus back to them when they were deserving of it. This focus is not deserved, and this episode would have done fine with an absence of Marnie.

There is a minutes-long sass wave about Gawker! AND HANNAH IS A COMMENTER. OF COURSE SHE IS.

Shoshanna's approach to the death of her high school friend, Kelly, is as unsettling as anything else in this episode, although it could be a recent rationalization based on her claim that, when Kelly did die, Shoshanna composed a whole book of poems for her. Now Shoshanna can say, callously albeit privately, that Kelly's death resulted in nothing bad and even benefited her circle of friends. Not to seem as if I'm condoning anything, but I love examinations of the messiness and complexity of mourning.

The death in Hannah's life exposes the extent to which her self-absorption is a component to her mental illness. "I think about you dying all the time," she tells Adam, who wonders aloud if Hannah would even care if anything happened to them. Hannah admitted to her therapist last season that she is consumed by the fear something bad will happen, and in order to compensate for that crushing obsession, she has only the belief that she, through her actions/compulsions, can evade her loved ones from their disaster. This is where that "I hate everyone who loves me" feeling comes from that Hannah has — it is easier for someone in that mental prison to have relationships that lack depth, such as the ones she has or had at one time with Marnie, Jessa, and Shoshanna.

Surrounded by death, Jessa resolves to visit the grave of an old friend, her favorite friend, named Season. Season, as it turns out, faked her death (aware of Jessa's investigative zeal, the fakery was not extensive or much of an exertion on Season's part). Jessa finds her not only alive, but well off. Season's husband, while on the trendy side, is distractingly attractive. "None of this is going to work out for you," Jessa — with her void of job, support, or prospects — tells Season, with her brownstone, baby, and that aforementioned husband. Who is he — the actor, I mean? I love this, Jessa warning her that "None of this is going to work out for you," how much Jessa would like Season to rely on and invest in her when it's only that gesture Jessa recognizes. She cannot be relied upon or invested in, and if she ever had any illusions that she could be, this encounter — hopefully — obliterates them.

Ray and Hermie try to enjoy Marnie's viral Edie Brickell cover while rationalizing why their enjoyment isn't mean spirited necessarily, but grounded in the extremely grey achievement that is Marnie's performance, which is bad but in that way that has its place, and YouTube is its very place. She appears to quit, but so far, no one seems to have successfully quit Ray's employ. Unfortunately, this moment doesn't dwell on Marnie's video long enough or the ramifications of Marnie's exit long enough to justify the earlier interstitials or add to Marnie's storyline. I could have waited for this, as a viewer.

"My whole life has been death" - Laird is back to full effect. His turtle has died, and he didn't even think that was possible. Also still on this plain: Adam's sister, Caroline. Watching Caroline frolic in the graveyard, I love her swarthy physicality and its resemblance to Adam's. What kind of hell on earth were the Sackler children? Caroline tells Hannah a story about how valiant and caring and marred by death Adam is, but the story isn't real. Laird cries when he hears the story, "Just because it's fake doesn't mean I don't feel it." Hannah, despite finding Caroline's stunt fucked up, recycles the very same story for Adam in an explanation of why she has so much scar tissue to work through in order to properly mourn Hedwig.

Do her tears come from her disappointment in and disgust with herself? With the hard stare she and Adam have given in this episode about what's broken inside of her? As bleak as it is, after last week, I'll take feeling like I can't wait to see where this leads over feeling like this better lead somewhere.
Posted by Unknown at 11:24 AM