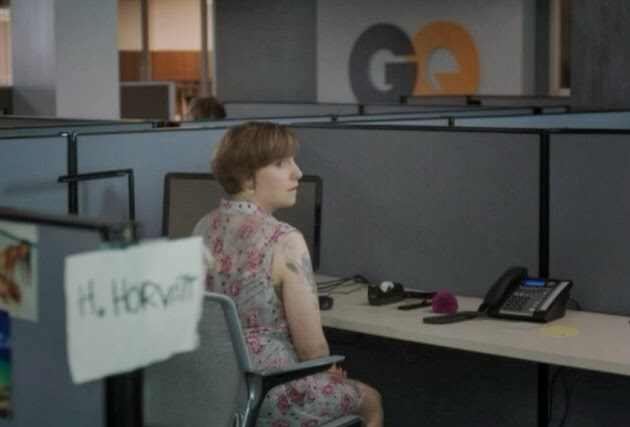 I can't help but feel the unclarity with which Ray's employees keep quitting is a meta commentary on the show's disintegrating grip on its dialogue.

When Ray asks Hannah if her new opportunity — at GQ — is to be a "before" model in a before and after shot, I realized just how long it has been since Ray really sounded like Ray. That is some season one Ray which, if you recall, I hated, but I've hated the direction his character has taken even more, so this was practically welcome.

When I say that I hate the direction his character has taken, let me tell you what purpose I thought Ray would serve: in "Leave Me Alone," he did what he always does — pontificate at Hannah, condescend to her, and she internalized it and learned from taking his advice the hard way — he didn't guide her, he mislead her, and she the fallout came of her second guessing herself. I love Ray as a tuning fork of the titular's own developing sense of when to and to not heed advice and how to read the intentions of others who seem invested in them. When it seemed like Ray was headed down that path, it made me curious about his character. To make him simply a weary sage whose clear-minded advice Hannah is just too blind to take feels like some tragic backpedaling.

I have not watched the first season of Girls since before the second season premiere, and I am looking forward to re-viewing it from the beginning in order to feel whether or not Hannah's arrival at GQ feels organic. I am inclined to be critical here, but still: it is exciting to see her leap again to commodify her work. These scenes are some of my favorite in ages and recall in all the right places her stint at the fondlesome law firm. They also recall, unfortunately, the Forbid office in all its yawning hipness.

In fact, this was an episode about callbacks — like the one Adam gets from his audition, and, as Ray and Marnie point out, of doppelgängers. Some of them grim: I am pretty disappointed there are not more made-up publications, like JazzHate.com, name checked here in the course of the very heavy-handed scene that brings up n+1, the New Yorker and the Yale Younger Poets Prize. Also disappointed that viewers did not get to see Adam's wreck of an audition. And that the remainder of Ray in this episode amounted to his name checking Ken Burns' jazz documentary. And how Jessa's sole scene is a glorified interstitial, which is itself a sequel to the interstitial earlier in the episode in which Shoshanna quietly contemplated her loss of the newly successful Ray, which is all plotplotplot.

Not disappointing in the least: Adam's proposed Etsy venture.

There are hints of change, though. The guy who sidles up to Hannah all work-spouse-like is reminiscent of the pharmacist in "the Return." But he is as surprising and fruitful an encounter in a different way. Unlike so many characters that have dropped into frame since season two, Joe the coworker isn't a stock caricature. I love how he seems desperate to connect to Hannah but treats her like a friend and not like a prospective sex receptacle. I would be really into seeing Hannah recoil from a relatively normal friendship. Or if he turned out to be a Hannah in his own way, that would be great also. He demonstrates enough of his own strain of self-absorption.

I REALLY love how Hannah came alive in the advertorial meeting. It was like watching her dance! There is a certain level of comfort in having it confirmed to you how you are cut out for no other work but the kind of "spiritually fulfilling" art with which Hannah is concerned. There is a certain bittersweet brand of dread that coalesces over the soul's throat when you find you are really not too bad at something sort of awful.

Other callbacks: Shoshanna's sex with her boyfriend is a nice flip on the season one encounter that almost saw a pre-Ray end to her virginity. Marnie's shouting at Ray in the restaurant is a sort-of-inversion of the shouting that resulted in Marnie and Charlie reuniting at the end of season two (unlike Charlie, Ray won't play along with the Marnie game, but the fact that Ray has the Ray game catches this union in a constant whirlpool of "you're doing it wrong"). Jessa is back to working with children like she did in season one, and I can only hope it leads to such a good story as that one. Watch the season one scene of Jessa getting the babysitting job and then the one from this episode with Jessa advising the customer about christening dresses for a look at how her character has "progressed" (and how it's caved to the aforementioned dialogue problems).

I feel like I may have more to say about this episode's place in the story by the end of the season, but as interested as I am in Hannah's new workplace (where she gets as stressed out as she did the night she did cocaine and found out her two best friends slept together, per her head-in-the-faucet move), I am growing weary. The things I loved about the show are getting scarified in favor of plot. I like the plot well enough to keep watching, but as for writing about it in-depth...I'm afraid these posts will become a chronicle of my disappointment.
Posted by Unknown at 3:15 PM