In the past week I've been sick, shouldering responsibilities at work that have interfered with my ability to be restful, and resumed exercising, which I have to approach very lightly because I have used exercise in the past to hurt myself. Negotiating all this, getting a lot of rejections, preparing to live with my significant other — I have been feeling overwhelmed. And last week's Girls really disappointed me. And I was ready to admit that I don't need to do this. I just watched Whatever this is and I felt completely narratively taken care of by it and delighted in it and understood anew how I could not feign enthusiasm for storytelling I wasn't invested in anymore. And then this week's Girls made me so happy. It was a fun episode, it was — for this show — a light episode. It was written by Lena Dunham with Jenni Konner and Judd Apatow, who know these characters and absolutely put to shame this season's lesser episodes. Girls does such an amazing job at reducing tired arcs that would plod out on a network sitcom into vivid bottle-esque episodes. Girls should not be afraid of that impulse to bottle virtually all its episodes. The moment it gets bogged down in plot, the show loses focus. Stop trying to make it happen and let it happen. That's not even what I'm saying, that's what this episode said. And if this show was getting truly meta about its plot and dialogue problem I would forgive it everything because, ugh, that's how I am. 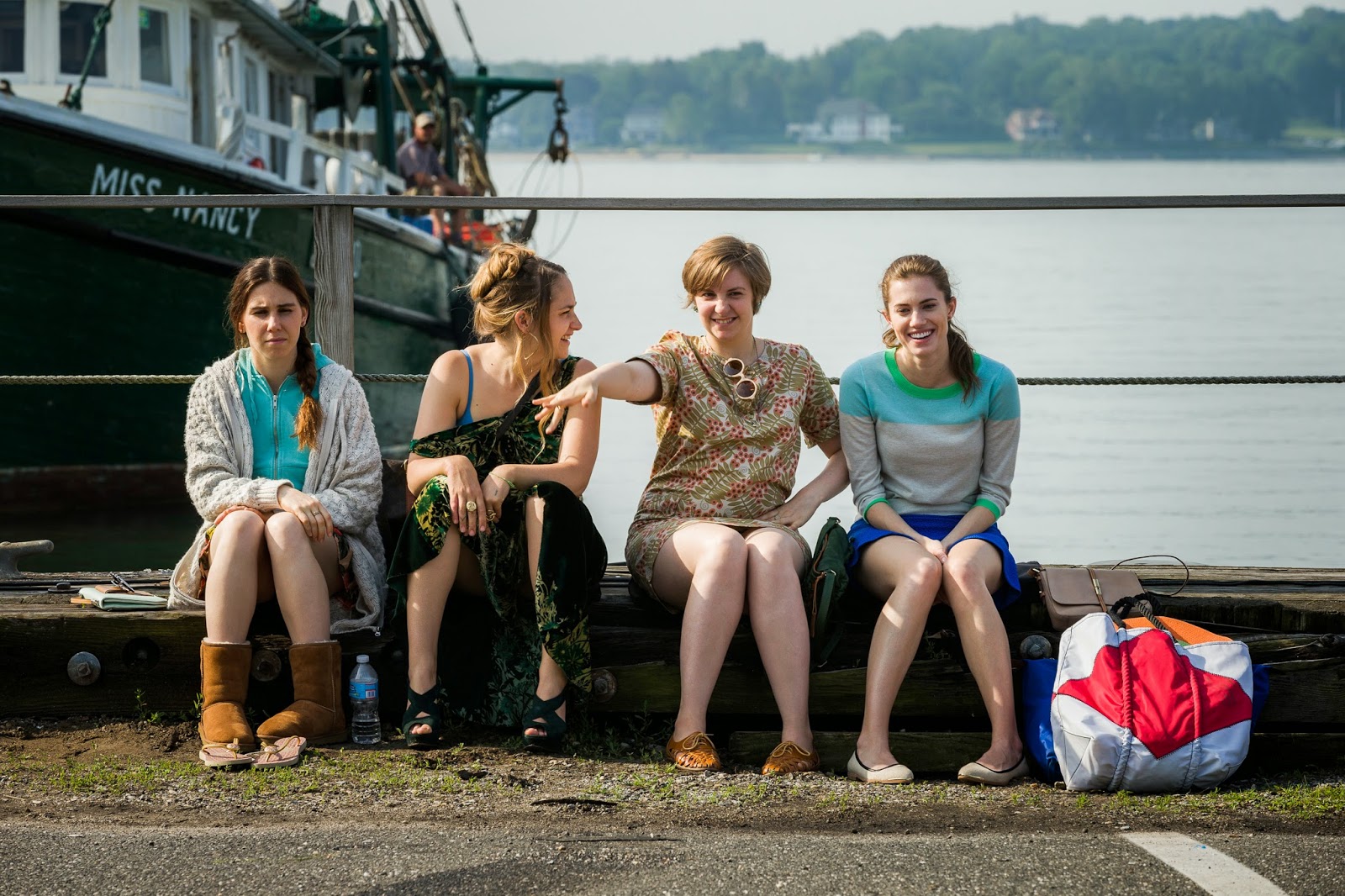 Here it is! Marnie being real Marnie, talking smack on the Hamptons! Jessa being real Jessa, fraternizing with bus people! Shoshanna being Shoshanna, the smartest character on the show! Hannah in a bikini the entire time.

This is a key episode and perhaps one of the best in the series. The nice and sad thing about Girls is that you could string together its greatest episodes and, even with a few forsaken Adam-gags, not be lost in terms of plot at all. This episode demonstrated Girls' every strength and joy to the gills.

The energy is high right from the beginning — the titulars arrive in the North Fork for a weekend getaway at a place that belongs to someone Marnie's family knows. Marnie has arranged all this as an escape from the wreckage of her life — where only Ray calls her to see how she's doing — so she can carefully curate a feelings-filled catharsis between, really, she and Hannah, but because Jessa is a safe receptacle for Marnie's rage, she could come, too, and then Shoshanna because all the rest of them are there, then, so she can come, too.

The weekend is planned to within an inch of its life, from throwing wishes in a bonfire to a Queens of Comedy screening, and Hannah can't even get her hands on white cheddar Goldfish because they're "not on the list." The opening montage shows them having fun in spite of Marnie's attempts to strangle that fun into something they can thank her for. She needs to be in that role, to curate, to guide — her chosen profession makes perfect sense.

Hannah refers to their galavanting as "Making memories with friends that will last a lifetime" — Marnie thinks you have to craft these, she can't trust them to happen. What does she think will happen? If they just have fun, they might be able to judge her dispensable. This comes on the heals of Hannah and Shoshanna's rescue of Jessa from rehab and that is certainly still looming in Marnie's mind, even if it is in the shadow of Charlie's abandonment.

A carefully timed Spring Breakers reference leads to the reunion of Elijah and Hannah. Okay: their conversation, which Hannah cuts through with her hatred of smalltalk, is everything Ray's scene with Shoshanna in "She Said OK" was not. It was funny and leant itself to substantiating the way Hannah and Elijah talk to one another. Hannah has been, essentially, lying to Adam and Marnie for years at this point. She does not need to impress Elijah and, in as far as they are emotionally enmeshed, they both seem aware of it and able to use it in a way that Hannah can't with Marnie. She and Marnie are too close.

Hannah identifies Elijah's three pumps as the "beginning" of her rift with Marnie, even though their rift began in season one, particularly with Marnie's inability to take Hannah's ambition seriously. I think back more than I do on any other scene on Hannah's confrontation of Marnie at the end of "Bad Friend." I think it was safe for Hannah to lose it on Marnie there, safer than it was to acknowledge that she couldn't forgive Marnie for not taking her writing seriously. I think Marnie knew it and has an interest in provoking Hannah into acknowledging that Elijah's three pumps were a red herring.

The little bit of plotplotplot viewers get in this episode is how, apparently, Charlie's app has failed. I like to imagine that Marnie is lying. This brief scene could have been totally superfluous, except Elijah's appraisal of Charlie is not to be missed.

Jessa's biggest scene is small but a perfect use of Jemima Kirke. She manipulates Hannah into drinking by threatening to fall off the wagon. She also flirts with a gay boy by likening him to a Robert Mapplethorpe subject. I feel like the real Jessa has not been on screen in ages. Between this and her bus-friends, I am so happy and afraid of this Jessa vanishing. Her evolution into bitchmonster makes sense but has not been graceful. When Jessa retains all of her Nico-esque trappings and "Video Games" rhetoric, when she hangs back because she really gets more out of being with her friends than probably any of them do because she gets the most lonely — that's real Jessa, and she's a full human, and when she isn't treated like that, it is so discouraging. People like her really exist and really do have charm and complexity even when they seem, based on their actions, like absolute fucking monsters. I fear that the writers who are not Dunham, Konner, and Apatow are too repulsed by Jessa now to write her well. I'm going to hang on tight to an episode like this one.

Hannah "confesses" to Marnie why she pushed her away, giving her a very psychoanalytic, blame-absorbing explanation of how her parents gave her space issues which conflicted with Marnie's parentally-granted abandonment issues. This rationalizing leaves nothing "healed." She got to reconnect with Elijah, who was remorseful — she doesn't need Marnie to apologize for anything. Hannah wants to have a good time, but Marnie wants catharsis. And Marnie will have catharsis — sort of?

The titulars have a dance routine in a kitchen, which is both a reason to watch the episode and not out of nowhere, since performance and dancing is part of their — especially Marnie and Hannah's — MO. And since the dance routine engages Marnie's musical theatre wound (I have a feeling there are many), unleashes her fury.

(Also, you can learn how to do the dance:

As Marnie's rage unleashes Hannah's, SHOSHANNA COMES ALIVE! She takes down their petty squabbling — Marnie is angry they didn't get to have a "healing" dinner uninterrupted by boys and actual fun, Hannah calls her out for focusing all her Charlie-fury on her. "Fucking whiny nothings." Shosh's radiant bundles of realtalk have been a long time coming, and her observation that her social anxiety is keeping her tied to those people is one of the most poignant to be delivered by a character in ages and ages, especially since Hannah and Marnie are going on three years of lies and evasion.

What I'm afraid of is that next week, none of this will be of any consequence. Shoshanna coming into her own would make a lot of the stress borne of this season worth it. I just realized, re-watching last week's episode, that she characterizes herself as "je-ne-regrette-rien-y" about her wilding out. Shoshanna is gold.

Hannah calls out the fact that they don't have fun together. Marnie identifies the fact that the only way she can tolerate Hannah is by playing along with the conceit that Hannah is trying to be "better" — Hannah as she is, as she seems to have settled into being, is something Marnie can't abide. Although Marnie's reliance on Hannah, the extent to which Hannah matters to Marnie regardless of her inadequacy, is what Marnie really can't handle, since even having a perfect boyfriend didn't make everything right the way it was when she lived with Hannah. That is what I suspect, but this is where I suspect I diverge from the feelings of other viewers.

There were so many quiet spaces, room for funny quips about $80,000 theatre BFAs and how sex with Marnie must suck, scenes that pushed the narrative along and were funny and were good and ultra-magnetic that had me looking forward to re-watching this episode. Even the last scene was in synch with what preceded it without losing any of its sweetness. I really want Girls to succeed in being about how "a friendship between college girls is grander and more dramatic than any romance." I really don't want to lose faith in the show following this thread. This episode gave me so much hope that it hasn't abandoned that.
Posted by Unknown at 12:27 AM