Welcome to Night Vale: the survey.

For the past week and a half, I have been trying to do nothing but listen to Welcome to Night Vale. In order to compensate for the disappointing assault of other things I have to do that are not lie in bed and hear Cecil Baldwin read the words of Joseph Fink and Jeffrey Cranor, I would like to talk to people about Night Vale, too. I want to enjoy it and critically dissect it. I can have it all. 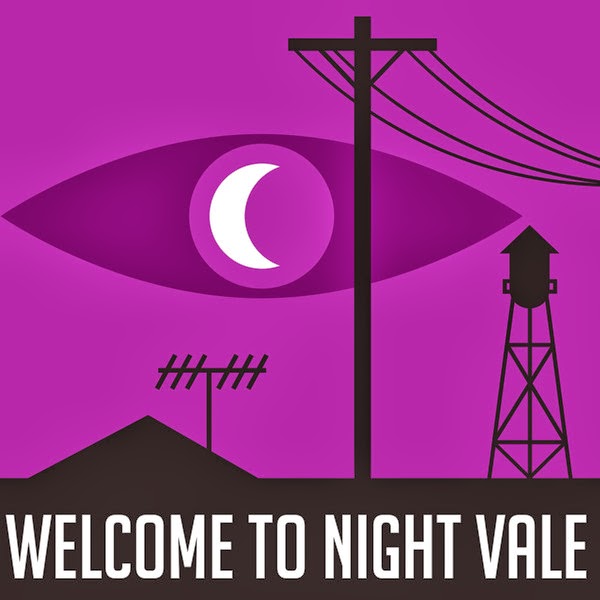 If you, Wayfaring Googler, are familiar with Night Vale, please proceed. If you are not, please consider becoming acquainted with it. Welcome to Night Vale is a long form, fictional narrative podcast in the shape of a community radio broadcast from a small desert city in the American southwest. Every totalitarian corporation, shady government agency, and appalling abuse of civil rights that is or was is in full effect, masquerading as the mundane "blur of routine" that are city council meetings, library programs, and the like. Dispatches on all of this are delivered by one person, the character of Cecil Palmer, who is deeply dedicated to the people of Night Vale and whose rhetorical acumen is astonishing. The complexity of Cecil's statements, the way he ribs corporate double-talk by using it himself, the way he underplays his own capacity for understanding, and his naive conflation of announcer and reporter in order to disarm listeners who might not approve what he says (disapproval is rampant) make for such a moving, textured, riveting listening experience because all of this — which is incredibly vivid when read — is animated so much by the voice of actor Cecil Baldwin. So the character of Cecil resides and acts, via Night Vale Community Radio, as "the voice" of the citizens of Night Vale — which only deserves to be called nightmarish with the caveat that dream material is harvested from waking experience, since only the sentient glow cloud and buzzing shadow people diverge much from reality (and then, arguments can be made) — where he cannot always say what he thinks, but trusts that listeners can learn to think about what he describes for themselves, and where he falls in love. You feel the risk in everything; it is breathtaking.

Like I have hoped for few other things, I hope this synopsis piques your interest and you investigate Night Vale for purely self-serving reasons: I am interested in what you think of it. All of it, and some things in particular. Here is my Night Vale survey, and if you are a fan, nothing would make me happier than if you filled it out:

What age do you think Cecil is?

How conscious do you think Carlos is that his actions imperil Cecil?

How conscious do you think Cecil is, when he is helping Carlos untangle some mystery, that he is offending various controlling powers?

They are both dissidents, so what do you think is the nature of Cecil’s problem with Steve Carlsberg?

What do you think of the significance of Cecil being a radio station intern who survived?

Which story lines would you like to see occupy a central part of a whole episode?

Do you hope to ever have the creators confirm the correct visual representation of the characters, or do you hope they never do that?

Which episode detonated itself on your greatest vulnerability? I felt, for instance, paralyzed with fear during “The Auction.”

Which episode do you think presents the greatest mystery? Nothing fills me with more questions, for instance, than “A Memory of Europe.”

Which controlling power fills you with the most sorrowful rage? And which part of life in Night Vale hits closest to home for you?
Posted by Unknown at 12:23 AM

Email ThisBlogThis!Share to TwitterShare to FacebookShare to Pinterest
Labels: Welcome to Night Vale