A Cyrano de Bergerac to make New York fall in love with him. 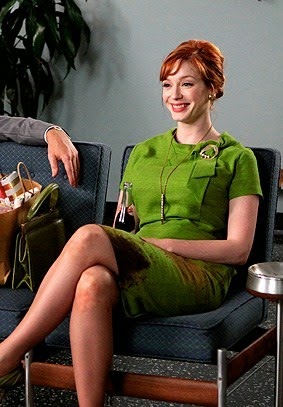 Mad Men is back. When Don is on the plane talking to Neve Campbell, she tells him she scattered the ashes of her husband, who died of alcoholism, on Tom Sawyer Island and Disneyland. Tom Sawyer has come up on Mad Men before: in season three's "Guy Walks into an Advertising Agency," when Don and Layne follow felled ad man Guy McKendrick to the hospital after he gets mowed down by secretary Phyllis Sadler with a John Deere tractor. Don and Layne hang out in the waiting room and Layne tells Don he's been reading a lot of American literature. He cites Tom Sawyer as an example and says, "I feel like I just went to my own funeral."

Also: I read several recaps of "Time Zones" and none of them wondered about Harry Crane's whereabouts. Sally and the Francis family, yes. But not a peep about Mr. Crane.
Posted by Unknown at 4:55 PM