I've been writing a book about how what it means when girls are taught lessons and when an audience is inspired by what they see to teach girls lessons. And Maya Angelou has died, some people around me said some horrible things about her, and tried to challenge my assertion that she is an important figure. My friend Liz Laribee posted on Facebook this quote from her: "Don't let anybody raise you. You've been raised."

I've been crying a lot lately. The last time I cried this much was when someone was hurting my physically. Jill Abramson was fired from the New York Times on May 14. The next day:


Though Bly got her start with rightful, well-articulated rage, she didn't let those qualities define her career. In "The Girl Puzzle," Bly's first published article, she argued that women should be allowed to do serious and interesting work, and that they should be equally compensated for it. The assignments that followed—the "life-style pieces"—weren’t what she wanted to be doing, but rather than rebel with polemic Bly travelled the world, interviewed politicians, and put herself in dangerous situations. Rather than work to expose unfair expectations, she chose to subvert them. Bly reported the stories that she believed she was entitled to write.

For young women just starting out in journalism today, it is perilously easy to fall into the trap of writing only about so-called women's issues. In a media environment that reliably rewards trading on one's gender identity, the financial incentive for young female writers to approach the world with a narrow set of politicized questions—the answers to which they already know—is great. And while there is surely a place for this, no girl grows up wanting to count bylines or to scour TV shows for signs of sexism. This week in particular, in the wake of Jill Abramson's firing by the Times, is a good moment for women journalists to remember Nellie Bly, a flawed but still effective model who wrote about what she wanted instead of arming herself with the hammer she acquired in her youth and spending the rest of her career searching for nails.

- Alice Gregory, "Nellie Bly's Lessons in Writing What You Want To" in the New Yorker

Then Isla Vista. Then I went to talk to a group of girls, seniors in high school, about pursuing careers in media, and I could not keep myself from mentioning Isla Vista. Or crying about how getting diminished, interrupted, belittled and verbally abused by men in my life (which I was able to reign in until I was no longer talking to the high school seniors).

"The answers to which they already know" — that article inspires real fury in me. What an awful, irresponsible thing to impart to aspiring female-identified journalists. The generalization "no girl grows up wanting to count bylines or to scour TV shows for signs of sexism" is a clear indication of bias — perhaps Alice Gregory does not want to do that, but neither she nor any other person who is not a straight, white male could grow up and do whatever kind of journalism they want were it not for those who call out the bullshit. Maybe Gregory met a person who liked to call out bullshit because it made them feel superior, but when faced with a group of high school girls overjoyed to talk to a young woman doing what they want to do about their dreams, I am fucking on fire to make that possible for them, to model a voice for calling out bullshit. What is the point in denigrating that but to train the blame on women who find their place in the world to be the thing worth writing about the most?

I stand with anyone that might get called "defined by" rage. It is not a limitation you place on yourself, it is the limitation others who are intimidated and annoyed by a problem they refuse to see try and erect. It is an indication that you understand the world in which you operate and love it enough to want it to change.
Posted by Unknown at 3:23 PM No comments:

An update on the book I'm writing.


When I was in college I wrote a very long research paper about the problem of how female writers are read and reviewed. My (male) professor did not want me to write the paper if I did not devote sufficient space to illustrating how the problem I was describing was real, and not what I think he perceived as being my hair-trigger reaction to the subject. I was pretty beaten down by then, and when I reread the paper, I was sad to look back on how much I had intended to write about solutions, about ways to make change, and instead I spent such a long time cataloging stuff I found totally dispiriting, the ways in which all of these writers whose work had made my life were dismissed, insulted, and dehumanized.

That's fifty Word document pages, I explained to a coworker yesterday. This is the first time I have ever done research strictly on the internet! When I was in middle school and high school, my school allowed only a certain number of online sources — everything else had to be from books — and in college I could never get my internet connection verified by security, so I just gave up and did all my research in books in the library. So the ease of this has been something of a revelation.
Posted by Unknown at 6:12 PM No comments:

Some may have found the computer being installed in the creative lounge to be too on-the-nose, but come on. Catharsis. It's nice and safe to be disappointed and furious at a fictional story.

Hang in there for fifty years, Sterling Cooper & Partners creative: you will get your lounge back (although you will not have offices) and you will each have computers slender enough to smash when everything gets too stupid. 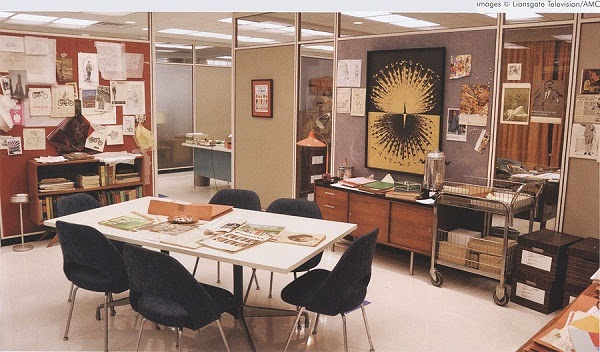 Also: "Lou Avery" was the name of James Mason's wife in "Bigger Than Life." I have not seen that yet — are there parallels? She was subject to her husband's raging addiction...
Posted by Unknown at 2:18 PM No comments: