Destroying all the ladies.

The original, central Mad Men characters all had names that directly referenced some major sixties thing — Dorothy Draper, Hare Krishna, Betty Friedan, Alfred Kinsey, Campbell's Soup as made famous by Warhol, and so forth. Peggy's name has eluded people trying to fit her into that scheme. I do not think Matthew Weiner has ever definitively identified whose names came from where, but the soundest explanation I have found for Peggy's name is the Simon & Garfunkel take on the folk song "Peggy-O," which is about a very conditional love affair — so sad and so apt. 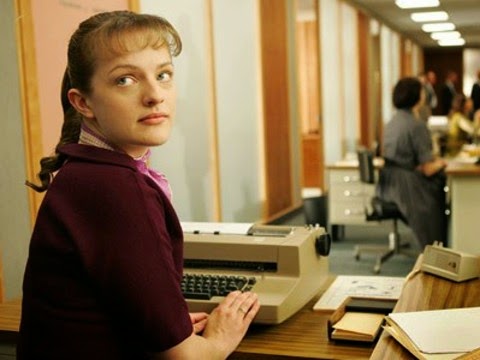 The song is on Wednesday Morning, 3AM, which is also where "Bleeker Street" comes from, the central song of the episode "the Suitcase." If there is anything that locates my greatest vulnerability with maximumly-abusable precision, it is Peggy on Mad Men, and "Peggy-O" is the experience of watching her in song-form. Mad Men started airing when I went away to college, and all my initial viewings of its pre-hiatus seasons were in dark pockets between everything that was going on at school and the time I could coerce friends into spending with me. I am so absorbed in every detail of every episode that, every time I watch it, I return to being that person: stuck and terrified about what is going to happen to me and accounting for my every moment but still in the dark, watching this show. To re-feel those feelings in the fall now, there is a dimension of gratification, because now is a very good time — there are things that have never, ever been good about my life that are good now. Fall has always caught me on the edge. It is not a bad time to be haunted.

EDIT: From the best brain, which happens to inhabit my best friend, Clare —

I think this is a very astute reading of Peggy's origin and got me thinking a lot about it, and I think Bob Dylan's 1962 version may capture Peggy better, lyrically. Dylan's take on the traditional is still a love song but with very explicit political ties (dead Captains and Lieutenants). Unlike the S&G version, she is left alone but it does not seem like such a personal tragedy. In fact, you don't even know where she is or if she is alone, you just know that this dude is telling her the captains are gone and Lieutenants dead.

Mad Men have also made some great references to the folk scene of the time, and while S&G were undoubtedly important, Dylan is really the face of the whole thing. I think that he captures Peggy's spirit as well. The S&G version implies that Peggy has stayed where she is ("If I ever come back") whereas the Dylan version is very vague, going from 1) at the march, 2) what the mother says, 3) come down the stairs, 4) Lieutenant is gone, 4) Captain is dead, end of song. She is not heartbroken, explicitly, and honestly she could be anywhere. She may not have stayed at home, waiting for him. I also think the bit with the mother is so important because that sort of independence was a theme in the early seasons [note: Peggy's relationship with her mother gets play for most of the series in seasons two through five].

The mother's thoughts are brought closer to the end in the S&G version, but asks what she will think about her going to places far and strange. Dylan's version is a little bit more final — "what will your mother say to know you've gone away and never, never, never coming back"(i-ooooo, if you will).

The arrangement of the lyrics is very important. The S&G version, the running is early — right after the march, and she's straight into riding a carriage. This seems to explicitly be about a marriage: she is still very much wrapped up in a man. Dylan's Peggy, rather, does not have a carriage: she runs down the stairs and is immediately greeted with the Lieutenant's death and a missing Captain. The question of the mother is asked and them immediately she seen running down the stairs — this impatience to move beyond, to get out, is coursing through Peggy, and it feels like that man is an excuse to go out beyond.

One can only surmise this Peggy, like Ms. Olson, had to take things upon herself to get through the death of a leader (hiiiint) and the the absences of a captain (hiiiiiiiiiiiiiiiint).

I don't think we ever will know definitively where Peggy comes from, but I think that song, regardless of the version, is a really good bet. There are so many readings and interpretations of the original ballad that many artists have created, and it — like Peggy — resists traditional readings because there are so many versions and truths, and these versions are often selected or altered to meet specific requirements of the artist using it. Dylan made it more political, S&G make it more romantic, and there is no One True Reading, no version is more or less right. Like Peggy, it contains multitudes and the version used relfects more on the user than the subject.