This was a gift. 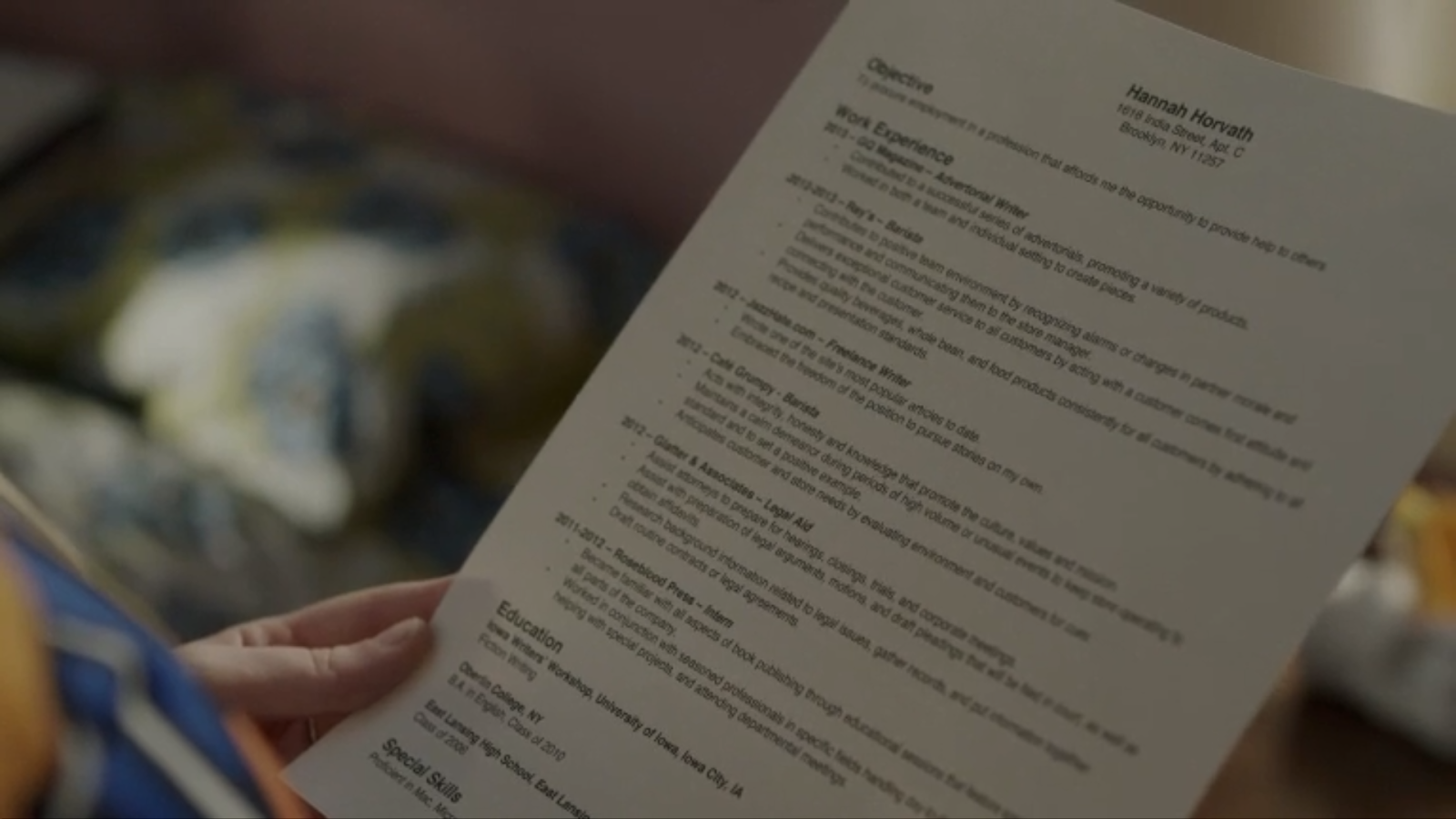 "Close Up" opens on a series of couples. First, Adam and Mimi-Rose, who now sleep in Mimi-Rose's lavish and keenly designed loft. He makes her a luxurious breakfast on their deck while she sleeps in. They are everything Hannah and Elijah are not back in Hannah's apartment. Hannah and Elijah are not intimate, and Hannah cannot enjoy any kind of breakfast because Elijah has eaten all of her cereal, plunging her into a meltdown.

Desi and Marnie copulate to the sound of their own music. Shoshanna, meanwhile, has the chance to become somebody's coworker — the way Desi and Marnie, as far as their band goes, are coworkers — but she rejects it. In an interview for a marketing position at an instant soup company, Shoshanna uses how much she does not want the job to give vent to her frustrations with job interview pretensions and with the unimpressive product. Although the interviewer, Scotty, rejects her for the position — he says her objection to the name, Madame Tinsley's, gets her off to a bad start, but clearly this guy who is looking for marketing help has never seen "Mad Men," because anyone who neglects to try and change their name wants to see them fail — he does ask Shoshanna on a date, an invitation she accepts.

The extent to which Shoshanna is completely over everything in this scene was a high point for the character. Shoshanna was shortchanged for fun scenes almost entirely last season. I think she is channeling Jessa pretty hard here, too. She definitely learned the term "bedussy" (I take issue with the spelling of that portmanteau) from Jessa.

Both Desi+Marnie and Adam+Mimi-Rose find out one member of the relationship is not on the same page as the other with regards to what their relationship is. Between Marnie and Desi, the misunderstanding is all about their music, because they are both people who love to project, and that is their stage on which to do so. Marnie sees them as "She & Him, but with actual romance." Desi sees them as "modern American folk with an indie edge." He also believes the song Marnie wrote, "Close Up," that she wants them to perform at a showcase, is misrepresentative of their oeuvre. The subtext is all there, and the joke that is Desi's ideals about his music as they collide with his overbearing douchebaggedness is so powerful. Even Marnie has a hard time humoring him.

Meanwhile, Adam and Mimi-Rose hang around post-breakfast and Adam proposes they go for a run. Everything from the way he reads his lines to the way he snarls his desire to see her "bounce" is sensational. Adam Driver has not had so many fun things to do in a scene since the second season, at least. He was definitely all gravity last year. And the feral way he describes how he wants to watch her suggests that he is not trying to stifle and warp himself the way he did with Natalia. All of it works to make the blow as hard as it possibly can be when Mimi-Rose says no, she cannot go for a run because she is recovering from an abortion that she had the day before.

This calls back to "Vagina Panic" in season one, where Adam passively shamed Hannah for supposing that abortions were no big deal. Here, Adam is confronted by Mimi-Rose, totally unruffled by her decision. She wants to be honest with Adam about her decision, but it was her decision, she stresses. She went with her friend, Sue-Ellen Garth, and she has no qualms and does not need to crawl into Adam's arms.

First of all, their subsequent conversation is a garden of expositional delights. Mimi-Rose's middle name is Eleanor. Adam's parents were married within a week of meeting one another. Also, as the owner of an inconvenient name, I love the way Mimi-Rose is defensive about her name. Adam is so shaken by the way she went along and did not include him in the decision to abort the ball of cells he helped provoke inside of her that he calls her evil and proceeds to pack his things.

Both Adam and Hannah are approached by the rawest, most accurate descriptions of their respective challenges as characters in this episode. Adam gets the opportunity to truly confront his need to be needed when Mimi-Rose stops him from moving. Their conversation addresses perfectly and specifically precisely what they are experiencing, which is an astonishing departure from the conversations Adam has always had with Hannah, which served only to dance around how they thought no one could love them, but because there is something wrong with the other person, they have a bit of leverage over them, so they are as much as a risk as they are willing to take.

But between Adam and Mimi-Rose, we get this:


"You don't ask me how you look or whatever. You just look in the mirror and go. You're like those jellyfish who only need to fuck once to have generations of kids. Sometimes I just can't tell what I'm even here for at all."

"See, that's what I love about you. You know the weirdest stuff. Your brain does not process information in a normal way at all. Truly, Adam, I care about you so much."

"No, I don't need you. But I love coming home and knowing you're behind the door. And I love watching you bend down and pick something up cause you use your body in a really strange way. And wanting you like this, that's better than needing you because it's pure."

Even where Mimi-Rose is remarking on Adam's idiosyncrasies, it is with markedly more warmth and affection than when Hannah would make reference to Adam's elephantine ears.

Meanwhile, Hannah has the opportunity for a revelation that could be as relevant to her as Adam's is to him. But Hannah does not have someone with Mimi-Rose's clarity of mind to usher her there. In fact, the person Hannah is talking to — her therapist, played by Bob Balaban — seems mysteriously preoccupied by Mimi-Rose. He assures Hannah she has merely rendered an all-too-accurate image of her, but Bob Balaban clearly knows who Mimi-Rose is, setting Hannah up for probably the same kind of fateful life-bond with Mimi-Rose that Lena Dunham developed IRL with Audrey Gelman, the daughter of her childhood therapist.

Bob Balaban asks Hannah how she thinks of writing as a career option. No one ever poses questions like this to Hannah — he isn't asking her how she thinks she's going to pull it off, he asks her what she thinks about it and why she wants to do it. She thinks aloud about how her favorite writers helped her shape her world view. Bob Balaban seizes upon that and really interrogates Hannah's impulse to help. Going to Iowa, Hannah says, made her mother happy, and the decision became all about that. Bob Balaban calls her "beautiful" and "stable" for having arrived at the understanding that she is a "helper." This scene is such a minefield!

Hannah's every folly and disaster has come at trying to "help" those close to her — her parents, Marnie, Adam — by doing what they want, wanting for herself what she wants for them. Hannah does not interrogate herself about what she wants or why because she does not trust it. What a sad and terrible thing that she does not know — or is not ready to face — why she wants to write. And based on their previous interactions, this is a totally uncharacteristic level of interaction and feedback from Bob Balaban. I think his willingness to track Hannah's motivation to the "helper" conclusion and declare her "stable" is an effort on his part to end Hannah's therapy so she will not find out he knows who Mimi-Rose is. Trying to guess what comes next isn't my foremost priority as a viewer of Girls, but this is some terrible thing Bob Balaban is doing to Hannah here. He is reinforcing that everything Hannah has done to serve others is done according to the correct instinct. She has no incentive to listen to herself.

Which makes the next scene, when she convenes with Elijah, Marnie, Shoshanna, and Jessa, make sense, even though she is on raw terms with everyone. Hannah does not trust herself. She gives credence to their suggestions and their takes on her situation even though they are projections of their own need to be the center of Hannah's universe at best.

At their diner date, Shoshanna decides she could always be just like her mother and defer her dreams by being the woman behind Scotty the Soup Mogul. Shades of her season one relationship with Charlie creep into Marnie's talk of Desi. When Hannah says she wants to get a job helping people, they unanimously assail her with examples of her legendary selfishness. Their chorus of jobs Hannah might consider that would not disgust them yields for Hannah one useful nugget: because she cannot do, she can teach.

While all this is going on, Ray makes the sojourn to Community Board Eight, where he confronts Marc Maron, who could be future him. The discord at the meeting moves Ray to ready himself to make the run for a seat, which is inoffensive, but it's all plot for now.

At the same time, Hannah readies herself to get back in the job market, leading to one of my favorite moments in all of Girls: the reveal of Hannah's resume. It's one of the best jokes to which Girls has ever been home, and I'm dedicated a post to it alone.
Posted by Unknown at 9:46 AM