The crazed vivisectionist of his destiny.

...she was the crazed vivisectionist of his destiny. It is hard to imagine today how potent and overwhelming the experience of sex must have been in those early decades of the twentieth century, when orgasm seemed an experience like the discovery of radium.

- Virginia Nicholson, Among the Bohemians


In order to finish the introduction to my Girls book by October, it is necessary that I watch Sex and the City in its entirety. I am halfway through it for the first time since it premiered. The way the men blur together, the dialogue — significantly more explicit than the sex scenes — maybe the first appearance of weird Matthew McConaughey (my frame of reference here is not iron clad; if we have enjoyed at least fifteen years of weird McConaughey, that is valid), plus Sex and the City's innovations were television's to ignore/take and claim belong to other shows that came along in its wake, and it still feels fresh for that while simultaneously feeling repellently and fascinatingly retrograde for its approach to gender and queer sexuality and fashion, respectively.

After that escapade is over, I am going to replace powering through seasons of television with something else. I am confident that, except for Mad Men, I will not have a problem addressing or finishing or starting or failing to abandon any of the other innumerable things I have been suspending this year instead of watching television. But putting Mad Men away is the challenge. When I am not doing well, I always go to it, and the frequency with which I feel I need to put aside what I am doing to watch Mad Men is grim, obnoxious, and ultimately counterintuitive. Instead of distracting me from unwellness, the extremely familiar sequences now have this eternal-recurrence-esque uncanniness.

And besides writing, I am going to avail myself of the convenient storage solution in my apartment and approach my unread books shelf by shelf. The shelves are small (and legion) and hold between ten and twenty books, so instead of the Sisyphean task of considering all my unread books as one whole obstacle, I can go one shelf at a time. 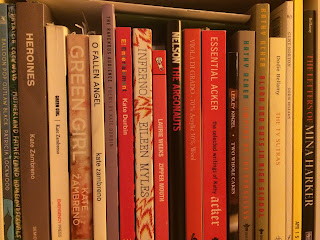 To read: Balloon Pop Outlaw Black by Patricia Lockwood; 70% Acrylic, 30% Wool by Viola di Grado; Essential Acker, Empire of the Senseless, and Blood and Guts in High School by Kathy Acker; The TV Sutras, Cunt Norton, the Buddhist, the Letters of Mina Harker, and Barf Manifesto (resting on top) by Dodie Bellamy

The "to read" column includes and will include henceforth books I read in high school — Essential Acker, for instance, made an impression on me, but I did not understand it — books that I cannot remember reading, and books I have not read yet because I am still recovering from Elena Ferrante's Neapolitan Novels and a months-long fugue I fell into with Poets in their Youth. I need to restore recreational reading as a priority. Especially the reading of The Story of the Lost Child.

Pulling on his pipe, [Hermann Broch] might talk in a very preoccupied way about "twilight consciousness," or be very down-to-earth about a New Yorker cartoon.

- Eileen Simpson, Poets in their Youth

The history of the Olympia Press I found this weekend definitely will not sabotage this plan in any way (although Girodias was so miserable to Valerie Solanas and the book does not seem to address it, so). Also, on the subject of reading, I am reading submissions for Catapult (and have been since December, but time is either a rubber band or a flat circle depending on your HBO original programming preferences), and by doing so am successfully recouping some of that time I do not want to mismanage. I would rather be reading manuscripts than almost anything else.
Posted by Unknown at 9:07 PM