If you need it abandoned leave it with me.

Last week, I had one of the worst times I've had since 2012. My life got a little ruined that year and I am pleased to report remains the benchmark for my bad times — last week did not top it, just took me back there, and I am still trying to get rid of the lingering effects. 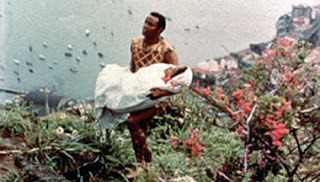 But on Friday, I had to work a split shift, and in between I had three hours to myself. I turned on Black Orpheus. I made plum tea. I checked the mail and Niina Pollari's Dead Horse (from which this post's title is derived) had arrived at last. I lied down on the couch, opened Dead Horse, and started to read it aloud. By the second poem, it was storming outside. I stayed in that position, reading Dead Horse out loud, drinking plum tea, and listening to Black Orpheus while the storm ensued. As soon as I finished reading, I finished my tea, Black Orpheus was over, and the storm ended, all at once.

That felt incredible. I'm going to remember that.
Posted by Unknown at 3:09 PM