When Girls premiered in 2012, I was a month or so into my first career-track job. When the second season aired, I was unemployed and interning to keep myself busy. When the third season aired, I had just started my first job where writing was one of my primary responsibilities. Last year, when the fourth season aired, I was still deeply in love with doing that job. I was ecstatic, empowered after going to BinderCon for the first time, so happy with the state of my book about Girls I was working on — by the time the season was over, conditions started deteriorating, and by the summer, my situation there was untenable. Now I have a job where my primary responsibility is editing (a dream) with the company I interned with in 2013.

It has meant a lot to me, since I got to the show with my vulnerability, to see the way Girls addresses the idea of what progress should look like, how progress is usually marked and measured, and suggests other ways to look at it. I appreciate all the progress the characters demonstrated in this episode and all the ways they have stayed consistent over the past half a decade. 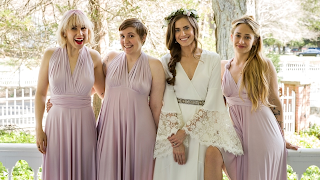 Marnie's wedding magnetizes Hannah, Shoshanna, and Jessa to a stately upstate New York home presumably wrangled by her mother. Party episodes are a big part of Girls — "Welcome to Bushwick," "She Did," "It's a Shame About Ray," "Beach House" and "Incidentals," "Tad & Loreen & Avi & Shanaz." "Wedding Day" is the culmination of a lot of these parties, particularly "She Did" and "Beach House." "She Did" featured the last wedding one of the titulars was in, when Jessa married a man she barely knew (Thomas-John!), accounting for Hannah's weariness about Marnie's feeble acquaintanceship with Desi — the specter of that wedding also accounts for Shoshanna's commitment to her role as a bridesmaid, since Jessa, her cousin, did not even tell her she was having a wedding.

That wedding happened because Marnie and Jessa went out together when Jessa desperately needed a friend after suffering a miscarriage. Marnie spent the night flirting with Thomas-John instead. It is from a deep, specific wound that Jessa advises a rainy wedding day, which Marnie dreads, would mean great things for her fertility.

The introduction of Hannah, Jessa, and Shoshanna as Marnie's bridesmaids sets up a tidy demonstration of the continuums on which they operate, with Jessa flouting the rules Marnie has established in order not to deal with the wedding and Hannah flouting the same rules in order to not run away screaming (which she does anyway) so she can attempt to stand by her best friend. Marnie is appalled that Hannah and Jessa are not following rules simply because they exist, and Shoshanna is using those rules, which she acknowledges are ridiculous, to show her respect for her role in Marnie's wedding.

Besides Hannah, Marnie's control issues might be the thing about Girls I missed the most. And this was the perfect stage on which to revisit them — "Wedding Day" doesn't depict Marnie's wedding, but the preparation for it. "She Did" depicted the wedding but none of what led up to it. When Jessa comes in from the rain (looking perfect because she was probably indoors somewhere, with Adam) and gets everybody ready, it provides some closure to her own disruptive nuptials, which permanently drove some distance between she and Shoshanna. By removing their makeup and undoing their hair and letting Marnie have the flower crown that her mother said made her look like a Starbucks cup, Jessa suggests that they look perfect because they're all there, like they were at her wedding. Jessa drags a lot of baggage with her, but she's done exactly what Marnie's doing and understands why she's doing it.

Much of the episode was dedicated to exposition, orienting the cast with each other now that it has expanded to include a whole shed of men. Desi assembling his squad of Adam, Elijah, Ray, and Baron Vaughn from Grace and Frankie — who I fear won't show up again but was happy to see here — and Fran, also, who he did not remember right away. The male characters' interactions turn the gears of the plot — especially Ray, who references his begrudging respect and affection for Hannah by grilling Fran and once more prioritizes Marnie's happiness over his love for her by encouraging Desi to not abandon her on their wedding day — but everything rich happens between the titulars, even when it comes to them interacting with their male companions.

Marnie does not interact with Desi in the episode and Shoshanna leaves her long-distance boyfriend in the distance in order to keep her focus on the wedding, but Hannah and Jessa have moments with their respective men. Jesse's intimacy with Adam has evolved, and at this point, it is not clear if he has mistaken her friendship for attraction, if he can't accept one without the other, if she can't accept one without the other, or what exactly, and I love how ambiguous it is played. It could be the first time they have kissed, the first time they have kissed in public, or the first time they've kissed since the last time, which was supposed to have been their last. When he finds her in curlers and a denim jacket, when he lights her cigarette, I love how she looks like a tired mother. She treats her friends maternally once she's gotten away from them for a few hours. Jessa wants to be part of a family — will Adam be able to address that need? Jessa was vitally involved with helping Adam's sister deliver her daughter, which is a pretty strong link for the show to have established after it has spent its run illustrating how important it is that Jessa get into a family. He has seen her help his sister to bring a family into being.

When Hannah escapes to the car to have sex with Fran, she is recovering from Marnie and the pressure she's applying to Hannah to choose a costume to wear for the wedding. The performativity of the wedding gets to Hannah, which they address in the car when Fran notes everything he's learned about Desi in the past few hours (probably more than Marnie's learned in the past few months — to wit, now would be a good time to address the fact that, on this show, not a lot of time has past, and the end of last season marked the biggest time jump in the series, so I think it would be safe to guess that Girls has so far depicted three years and Marnie has known Desi for one, give or take a few months): he is a serial deserter of fiancées and Marnie marks his eighth maybe-to-be-abandoned stab at matrimony. He has bailed on all his other brides. I am excited to see where this goes if Fran can divulge like Hannah — Adam would not have delivered this information within the context of "can you believe this guy?". If Adam was telling Hannah about it, it would be because it repulsed him, and he would judge Hannah's lack of desire to address it with Marnie. But Fran just expresses surprise that Marnie wouldn't already be onto this facet of who Desi is, to which Hannah deadpans, "You'd be surprised how much she can miss."

Hannah knows her best friend thinks if you call something by a name, it will be that thing. Call two people having brunch a couple, and they're a couple. The moving thing about she and Hannah is that they are not best friends anymore. One of the reasons the leap in time works so well is that the audience has no idea why, after last season's finale, Marnie wound up back with Desi. That's because Hannah doesn't know why, either. But they are best friends because Marnie says they are, so Hannah has to pony up and be her best friend because that's the role she serves in Marnie's life.

Marnie (whose makeup Hannah identifies masterfully as a face-plant into Hershey, Pennsylvania) asks Hannah if she is making a mistake. Marnie deliberately says she wants to know what Hannah thinks, and while Marnie will probably find it to be a mistake, no matter the condition of the marriage or what it does to Marnie, Hannah won't find it a mistake. She doesn't judge her friends' decisions that way, despite every one of Hannah's decisions getting declared a disaster by everyone nearly all of the time.